An opportunity for you to feed some friends who feed others 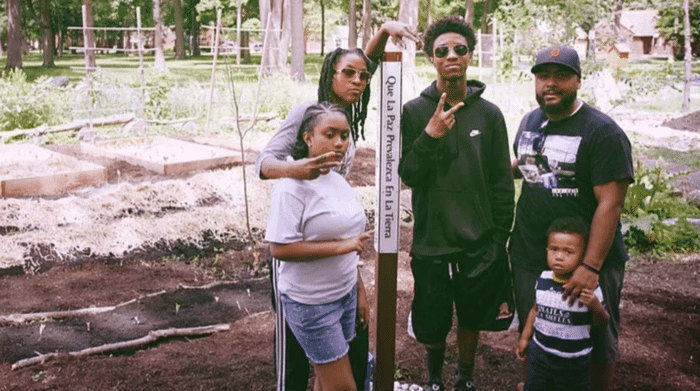 L'Oreal Hawkes-Williams can tell you exactly how, when, and where her life–her purpose in life–changed.

Whatever anyone calls it, a new vision lit L'Oreal while she was in the middle of doing the most ordinary thing: Making supper for her kids.

At that time in her life, she was a full-time mom and part-time grocery store cashier staying in her native Detroit.

It was just another weeknight. The TV was on in the background as L'Oreal cooked supper for her family. All of a sudden, a news report caught her attention. She stopped what she was doing to watch.

The Food and Drug Administration had issued a national recall on lettuce for E. coli. L'Oreal’s first thought was about whether she had any of the bad lettuce in her refrigerator.

Then she had another thought: Where does our lettuce come from? Where does any of our food come from? How do I know what is in the food that I’m feeding my kids?

Most people would forget these questions by bedtime, pushing them down and out because they seem impossible or inconvenient to answer.

She let those questions lead her on a quest to take control of the food that her family eats. She made up her mind to know the origins of everything in her kitchen and the processes that bring food to her family’s table.

She decided that the best way to feed her family the healthiest, purest food was to grow it herself. She decided to take up gardening.

So far, the story is not that extraordinary. Moms are always choosing to lead their families into healthier lifestyles. I remember when my own mom stopped buying breaded fish sticks and started making us eat broiled stuff with the bones still in it (yuck).

What is extraordinary about L'Oreal’s story is that her quest took her beyond her own family’s kitchen table.

The more L'Oreal learned about food, the more she wanted to know.

So she decided to go to college to learn about it.

At first, she enrolled in a few courses as her local community college.

Soon, however, she had a full scholarship to attend the University of Michigan. L'Oreal, her husband, Dennis, and their kids packed up and moved to Ann Arbor.

While studying at U-M, L'Oreal found a fire in her bones to do more than just study the food economy; she wanted to change it.

As a native Detroiter, L'Oreal knew the term “food desert.”

A “food desert” is an urban area where it is hard for people to find affordable and good-quality food. Many people in the United States take for granted that they can drive to a grocery store in no more than 10 or 15 minutes. They can find whatever they need or want there.

“Food deserts”, however, are areas where lack of grocery stores or reliable transportation make it close to impossible for people to find good food they can afford to buy.

For many years, national media reported story after story about Detroit as one big food desert. As L'Oreal studied food at U-M, however, she stopped believing these stories and soon thought of them as not useful at all.

L'Oreal stopped believing the popular stories about food deserts in Detroit. The solution to the food problem in Detroit was not to get more outsiders to come in and sell food in the city (as the national media seemed to suggest). L'Oreal came to believe that Detroiters needed to control, grow, and own their own food economy. She started using words like “resilience,” “self-determination,” “self-reliance,” and “sustainable” when talking about food in Detroit.

A mission found L'Oreal. She made up her mind to teach Detroiters how to grow their own food. Not only that, she would teach them how to design their lives around their own health, interdependence, and sustainability.

The question was: How?

While at U-M, L'Oreal met a graduate student named Naim Edwards. At that time, Naim was a Capuchin Service Corps member serving with Voices for Earth Justice (VEJ), an interfaith environmental justice nonprofit in Detroit. Edwards was staying at VEJ’s Hope House and practicing intentional community with the neighbors there.

About the time that L'Oreal met Naim, he was starting a neighborhood garden on one of the lots next to Hope House. He asked L'Oreal to come work with him as his intern. For the next two summers, Naim showed L'Oreal how to do community work and urban gardening.

When Naim moved on at the end of 2017, L'Oreal took over as the contract garden program manager for VEJ. Over the next four seasons, she grew the garden to cover three full city lots. In that neighborhood garden, L'Oreal’s passion and purpose took shape. She not only grew hundreds of pounds of food for local food pantries, she hosted hundreds of volunteers and taught classes on organic sustainable gardening.

In 2021, L'Oreal finally started her own nonprofit, NEW LEAF Detroit, to organize the mission to help Detroiters take control and ownership of their food and health habits. As NEW LEAF Detroit, she managed gardens and gardening programs at Michigan State University’s urban agriculture campus in Detroit and for VEJ’s Hope House & Garden.

All this time, L'Oreal’s husband, Dennis, did everything he could to support her work. Running gardens in Detroit does not pay much, so Dennis worked full-time (and then some) to support what became a family of five.

People who came to learn and work with L'Oreal at Hope House & Garden got to know Dennis, too. He was there almost as often as L'Oreal, helping out wherever she needed him. During summer months, it was normal for neighbors or volunteers to see the whole family working in the garden. At least once or twice a week, L'Oreal, Dennis, and their three kids, made the 90-minute round-trip drive from Ann Arbor to work in the garden together.

Doctors performed emergency surgery to remove a blood clot from his brain. For a few days, Dennis barely clung to life and did not wake up. When he finally did regain consciousness, he could not move the left side of his body and showed loss of his cognitive abilities and memory.

Dennis (and L'Oreal) spent the next few weeks (including the holidays) in the hospital. As of this writing, he is in a rehab facility. The doctors hope he can go home on January 17.

Dennis is young for a stroke victim, so he has better odds of making a good recovery. However, the damage to his body and brain is severe. He faces a hard, long, uncertain road back to health.

As Dennis was always at L'Oreal’s side as she pursued her purpose, L'Oreal never left Dennis’s side after his stroke. She told me that she plans to be there for him every step of his long way back to health.

He will need her. The doctors told L'Oreal to expect him to need constant care around the clock for the foreseeable future. L'Oreal’s new full-time job is caring for Dennis (and their three children). For that reason, she is not working at NEW LEAF or her part-time jobs–and may not be for some time.

For the Hawkes-Williams family, this sets up the nightmare so many of us fear: Living pauses, but the cost of living does not stop. In fact, the cost of living goes up as medical bills come due and special expenses arise from needing to reorder life around a disability.

The combined loss of Dennis’s income and L'Oreal’s income puts the family in a scary situation.

What would you do if you were L'Oreal?

As I wrote before, L'Oreal preaches and teaches self-reliance and self-sufficiency. Asking for help is always her last resort.

One of L'Oreal’s friends, Lakwiita Garbarini, however, saw that the Hawkes-Williams family will need help to get through the next few months. She started a GoFundMe page so that people can help cover living expenses for the family while Dennis recovers and L'Oreal cares for him.

Voices for Earth Justice, the organization that I lead, is also accepting donations on behalf of the Hawkes-Williams family.

No matter how self-reliant we become, we are never beyond the need for help and support. Indeed, those of us who are members of a community of faith know that God did not make us to be “islands.” It is God’s will that we grow into an interdependent human family. In the Christian faith, we call this the “body of Christ,” in which every person has something to give and every person has a need to receive from others.

I am asking you to be as generous to the Hawkes-Williams family as you would want people to be generous to you if you were in their situation.

I am also asking you to honor the choices that Dennis and L'Oreal made with their lives. L'Oreal made a choice to lead her family to a more healthy, sustainable lifestyle. That choice led her to teach as many people as she can to honor, support, and value themselves through grit, resilience, and self-reliance. As L'Oreal did the all-consuming, low-paying, thankless work of turning her vision into something real in the neighborhoods of Detroit, Dennis was there to affirm and support her every move.

This is a family worthy of honor and support.

I hope you’ll come alongside them so that they may soon return to coming alongside those they serve and support in Detroit.

Here is how you can be part of the Hawkes-Williams family’s recovery:

Click here to make a gift to Voices for Earth Justice (and designate it for the Hawkes-Williams family).

Write a check to Voices for Earth Justice and send it to 15894 Greydale Street, Detroit, MI 48223 (and write “Hawkes-Williams family” in the memo).

My dad was a Church of Christ preacher and my mom was a school secretary. They raised three children. Dad and Mom brought us up to believe and practice good, old-fashioned family values and the teachings of the Bible. I am proud of my... Continue →