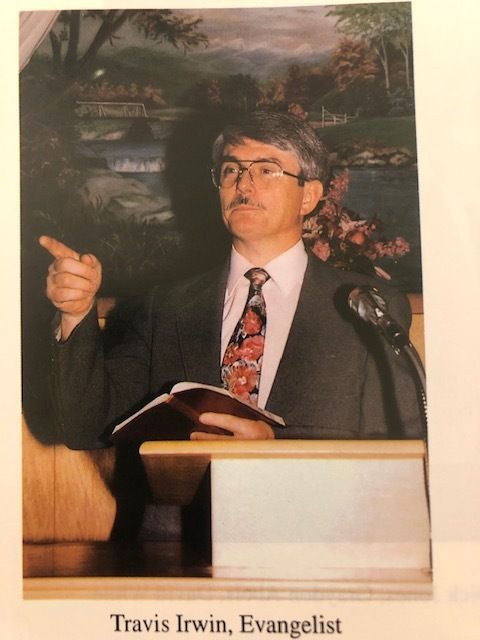 I imagine that 72 is a happy birthday. That’s a long life! That is a lot of years in which a man can find so many reasons to be thankful.

I imagine that 72 is also a hard birthday because, well, a man has to wonder how much time he has left…and how much harder it will get to keep on living one more year.

Seventy-two is not what we call a “milestone year,” but it is one for Dad. Last year–not long after his 71st birthday–cancer cast its shadow over him for the second time in his life. The doctors told him that with this cancer, it is not a matter of “if,” but “when.”

So 72 is a milestone, as every birthday will be for Dad from now on.

Dad and I are different in a few ways. One of them is that Dad has what we in our family always called the “heebie-jeebies.” He is always doing something or looking for something to do. None of us ever knew Dad to be the kind of guy to be still, to reflect, to just sit and…think.

I stopped buying him books years ago. He can’t sit still long enough to read them. A few weeks ago, I asked Mom if Dad would like a subscription to a mindfulness meditation app for his phone. She just laughed.

Dad is the kind of person who, when something happens, asks: “What do I need to do?”

I, however, am the kind of person who, when something happens, asks: “What does it mean?”

So on this, Dad’s milestone 72nd birthday, I am taking time to reflect on Dad’s life and seek meaning in a way that Dad will not (because, you know, he has the heebie-jeebies).

A year ago, I started an amateur podcast, Minister in the Making, to capture Dad’s life story in his own words. In each episode, Dad tells stories about a certain period in his life and work. We draw lessons and wisdom from these stories. We started the series with his childhood in the 1950s and are working our way to the present. As of this writing, we just put out Episode #33.

This is more than just an adult son trying to get a lasting record of his father’s life. I remember many of Dad’s good times and hard times, highs and lows, as he tried to live his life as a follower of Jesus Christ and a minister to the church of Christ. Our family was always good at sharing and talking about things together. So even when I was a child, Dad let me in on what he was doing in his life and work and how it was going.

These memories inspired the podcast. Now that I’m a middle-age father and husband trying to follow the Christ and minister in my own way, I think I understand Dad better than I did when I was a kid. In the podcast, I’m asking Dad to talk about the things that we both remember, but I’m asking as a grown man rather than as a child or teenager. It’s one thing to be 16 years old and ask your dad why he is doing what he is doing; it is another to be a 46-year old father and ask your dad why he did what he did (and if he would do it again the same way).

In the very first episode, Dad told the story of a man who walked up to him (I think it was at a funeral) and said: “Travis, you’re the real deal.” That meant a lot to Dad as it would mean a lot to any of us. Isn’t that what we crave? For someone to recognize authenticity and integrity and purity in us? I did not know until this podcast how hard and how long and how much Dad worked–and I lived with him!–but what impressed me again was how much Dad really loved people. He did so much–it turned out too much–because he cared so much about every person who crossed his path.

Early in life, Dad taught me: “Do unto others as you would have them do unto you” (Gospel of Matthew 7:12). I can tell you as an insider to Dad’s life that he was the embodiment of that “Golden Rule.”

But it is impossible to listen to a man tell his life story without coming across the mistakes he made and the sins he did.

In the last few episodes of the podcast, Dad had to talk a lot about those mistakes and sins. For example, he made the major mistake of making himself indispensable to the congregation he served. He made himself the linchpin of so many of the activities and ministries and programs that, when he left, many of those things stopped and the congregation struggled.

He made this mistake because he sinned in failing to trust God and trust his fellow church members. He failed to trust them to care about him as a human being, so that he did not ask for help or for rest when he needed it. He failed to trust anyone else to do what he felt he had to do himself.

Dad suffered because of this mistake and this sin. He burned out and crashed when he was 53 years old. He had to walk away from a congregation he loved.

Dad’s congregation suffered because of his mistake and his sin. It was not ready to move on without him and many of its members left.

This seems like a downer of a thing to write on Dad’s birthday, but the mistakes and the sins he made are neither the point nor the last word.

First of all, anyone who lives long enough will make many mistakes–even some very costly ones–that arise from immaturity at best and what we Christians call a “sin problem” at worst. If I made a podcast of your life story, how many of your mistakes would turn up? How many sins would you not be able to hide?

I think about this a lot. I’ve made some big, big mistakes in my life. Mistakes that cost my employer or my family or me credibility, money, opportunities, or relationships. I’ve committed sins like cowardice, dishonesty, greed, hypocrisy, lust, petty theft, racism, and sexism (just to name a few).

Sometimes memories of these mistakes and sins paralyze me with shame. I want to bury myself as punishment for all the harm and hurt I caused.

I know Dad wrestled with a lot of feelings when he crashed and took 15 months off from ministry work. But I also know that in that time, he named his mistakes and sins, spoke the lessons he learned from them, and then went back to ministry work as a wiser man.

It is that wisdom–costly, hard-earned, scarring, and terrible when events are forming it–that I want to tap in the podcast.

Wisdom grows when we compost our own foolishness. When we choose to go back to work with the wisdom we gain, we ensure that the price we and others paid for that wisdom is not paid in vain.

That brings me to the last word: Grace.

We cannot access and use our wisdom if we do not give and receive grace.

I know Dad carried the guilt of the people he hurt or let down by the mistakes he made in ministry. If he held onto the guilt and let it turn into shame, all the lessons he learned would stay buried inside him. They would do no good for anyone.

At some point and in some way, Dad had to give grace to himself and receive grace from others. I imagine that started with affirming his belief in the grace of God. I know Dad sought forgiveness from some people who could hear him ask for it without feeling any personal harm. I know that Dad had to forgive himself, too. After all, a minister cannot preach the free forgiveness of God and yet hold out on himself.

I noticed a change in Dad by the time he went back to ministry work at age 55. He seemed calmer, happier, and more at peace. He seemed to enjoy his life and work in a way that he didn’t in his 30s and 40s. He was wiser…and grace is what set that wisdom free to bless Dad and others.

I used to think that the best people–the most successful people–are the ones who have no shortcomings, never make mistakes, and rise on a straight line to the “top”.

Only those who believe in grace are the ones who can turn their failures and faults into wisdom that blesses and gives life to all.

A happy birthday indeed to the man who is still “the real deal.”

Can you remember the last time someone fixed their eyes on your eyes, grasped your hand, pulled you in a little closer, and…thanked you? I mean the kind of thanks you could feel coming through like a current. As if life force was flowing... Continue →