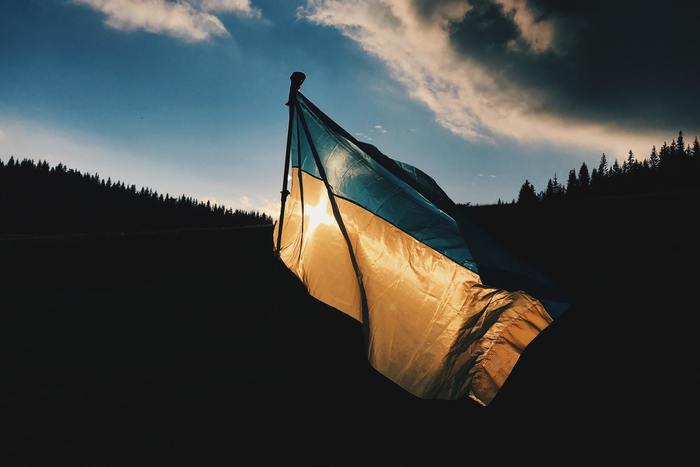 Photo by Max Kukurudziak on Unsplash

Last night, I tossed and turned for hours thinking about something that Fiona Hill said in an interview I read yesterday: “We’re already in [World War III].”

Imagining where all of this will lead is scary enough. Last night, I had to lie to my nine-year old about the danger in the world right now. I told him that “the bad guys” could not get to us here, but you and I know that is not true. It turns out that, sometimes, parents have to lie to their kids to keep them safe from their own imaginations.

I think about the Ukrainian parents of newborn babies like my little niece who is just three months old. I think of Ukrainians who need treatment for cancer like my dad, who has to go to the hospital every week just to stay alive. What is happening to those Ukrainians?

I feel so helpless.

I feel so hopeless.

I never thought I would see something like what I am seeing now in Ukraine.

I thought that, as long as we could keep nuclear weapons out of the hands of madmen like Kim Jong-un, the world would be safe enough. I didn’t count on the commander of the world’s biggest nuclear arsenal becoming one of those madmen, a dictator who can kill everyone on Earth by his own whim.

I hate to say it, but the more I listen to Putin, the more I am sure that, if he thinks he is about to go down, he will try to take all of us down with him.

Humanity’s greatest hope now is the Russian people. They are the only ones who can truly stop Putin from where he will surely take us. I am convinced that the vast majority of Russians, while not fans of the West, do love their families and friends and do wants a future for them. I have a feeling that more and more Russians may be feeling the same dread that I feel. Pray for Ukraine, but pray for Russia, too. Our Russian neighbors are in danger and under assault right along with our Ukrainian neighbors.

I want you to understand that any NATO power that fires a single shot in retaliation for anything that Putin does will start us down the path to nuclear war and the end of life as we know it. Military force is not an option as we face down a madman. If we want to keep living, if we want our children and grandchildren to have a future, Putin’s downfall must come from within his own country. Pray for the people of Russia like our lives in America depend on it, because they do.

At church on Sunday, one of the old men prayed for Putin to change his mind and pull back from Ukraine. Amen to that, but my prayer is that God will deal with Putin and do away with him quickly. And do it in a way that leaves no doubt that men who abuse, attack, exploit, and oppress their way to the top will come to a shameful end. The world cannot move on toward peace and prosperity with Putin in power.

One of the things that is striking to me about the last week is how much more I care about this war than I do all of the other wars going on around the world at any time. I am certainly paying more attention because the aggressor in this war is an autocrat who commands 6,000 nuclear weapons and seems hellbent on causing as much pain and suffering as he can.

But I have to confess that the fact that Ukrainians look like me and live in a country that in some ways resembles my own, is a big factor.

To be honest, I didn’t even know that some of these wars happened until I looked them up today. Did you?

So it is remarkable to me that I and so many of my fellow Christians in America are praying and speaking up with passion for Ukraine, but we barely mentioned or even noticed the millions who died (or are still dying) in other places around the world.

I bring this up, not to start any of us on a guilt trip, but so that we Christians might “examine” ourselves (Second Letter to the Corinthians 13:5).

We, as Christians, have access to a power greater than Russia’s 6,000 nukes. We have access to the power that raised the Christ from the dead, that raised the Christ to fill the entire universe with a love that resurrects and unites all things in peace (Letter to the Ephesians 2:11-22). If we believe we have access to this power, then we have a responsibility to humanity to pray it into the world. Imagine if Christians on every continent and in every country prayed this power into the whole world for all people.

What would happen if we did that?

We could brainstorm a hundred ideas for how to do that, but two come to mind that I will share here. I hope you’ll think of your own, too.

We must hold fast to our belief that the kingdom of our Christ cannot be at war with itself. While the nations in which we sojourn may fight each other, we must “make every effort to keep the unity of the Spirit through the bond of peace” (Letter to the Ephesians 4:3). In other words, American, Russian, and Ukrainian Christians are fellow citizens of the same kingdom, a kingdom that has neither borders nor a standing army and weapons of war. We are to wage peace through prayer and service together.

Second, we Christians can use our direct links to Christians in other countries to understand and care for their needs. Jesus, our Christ, was a refugee of political violence when he was a young child. I wonder if he had those hard years in mind when he said: “Inasmuch as you have done it to one of the least of these, you have done unto me…” (Gospel of Matthew 25:40).

And who are the “least of these” if not refugees of political violence all around the world? How might we use our connections among believers in the Christ to find out how we can show love and solidarity through service?

I have a few more things I want you to think about doing right now in this time of crisis for humanity.

First, go to church (or whatever faith community or house of worship is familiar to you). If prayer is the channel through which the power of God passes into the world, make that channel wider by making some of your prayer community prayer. You need affirmation, encouragement, and inspiration for these times. You can’t get those things on your own and you can’t give them to someone else if you’re alone. Go to church.

Second, read the Psalms. One of the things that strikes me about so many of the Psalms is that the songwriter is so often facing existential threats. He or she is dying, enemies are plotting, the nation is under attack, the world is ending. The ancient lyrics of the Psalms turn out to be perfect lyrics for these times. As you consider that God somehow brought the Psalmists through their own “valley of the shadow of death” (Psalm 23) and that their words live on today, you will consider that God will somehow bring us through our own shadow so that future generations will remember us.

Third, be careful about the information you take in. If you read or watch what is happening, limit your intake to no more than one hour per day. Any more than that and anger and fear may take over. Also, be careful about the sources you choose and be sure to read widely. I stay away from sources that I know to be partisan or to promote a partisan agenda. For the conflict in Ukraine, I am actually reading a variety of foreign news sources. When I say “variety,” I mean I pick several news sources so that I can sort out what is fact from what is opinion. If the same information appears across multiple news sources, then I can rely on it as closer to being fact.

Fourth, be careful about the information you share. A few months ago, I stopped sharing news stories on Facebook. I also stopped sharing essays that other people write, even if I think they are very good. These days, I take the time to organize my own thoughts and write my own essays to share. I think this is a good habit because it forces me to be think things through as I’m writing them. I’m also thinking about you and how what I write may be encouraging, helpful, or illuminating to you. If you choose to share on social media, I encourage you to share your own opinions rather than someone else’s, but when you do remember: “Let no evil talk come out of your mouths, but only what is useful for building up, as there is need, so that your words may give grace to who hear” (Letter to the Ephesians 4:29).

Fifth, “brighten the corner where you are”. This is from an old song we used to sing in church. Do you feel like you can’t do much about geopolitics and great power conflict? Pray about it and then start working to “brighten the corner where you are.” Be present, responsive, and thoughtful to your family and neighbors. Do what you can to encourage and serve the people in your own home, on your own street, in your own town. Put down your phone, shut off your computer or TV, and get out there! I think you will find that loving your neighbors will work a small miracle in your soul.

These are times that try our souls and neither economic nor military might can solve the problems that we face now. This is the time for the peacemakers–the “children of God” (Gospel of Matthew 5:9)–to love, pray, and serve our world back from the brink.

As we may find our hands trembling (as mine are now), let us remember this hallmark of our faith: One man may hold the power to kill all of humanity at this moment in time, but another Man holds the power to bring us all back to life again for all time.

One man may be willing to kill us all out of hatred and spite, but another Man will raise us all in love and for peace.

We know the Man who has the greater power.

May that power now be unleashed on the world through our faith, hope, and love that erase all borders and overcome all differences.

In my teens, 20s, and 30s–most of my life!–I thought that only a “loser” would stay home. By “loser” I meant me…staying home. By “staying home” I meant… …not being out with attractive, luminary, well-connected people on a Friday or... Continue →